The Onuku Game – an all time classic you can’t afford to miss. Well you probably can, but it was big fun creating the game and playing it.

Our trainee drew the graphics while I codet the engine and the game play. We know that most boats don’t fly – but Steve’s speedboat could and of course it collected flying helicopter Kiwis. Those Kiwis drawn by Charline simply couldn’t escape so at least we had a handful of models.

We created the original game for a german musician who signed a contract at EMI. Unfortunately that game was removed from the artists website when his next single was released. 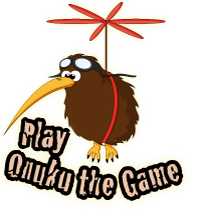